In the American corner of the book world, there’s a weird rite-of-passage inflicted on young readers somewhere between ages 9 and 12.

The social expectation is that young readers will embrace the chapter book and esteem the illustrated works of their youth as nothing more than “kids’ stuff.”

Usually, this clever ruse to advance the reading levels of our youth works to the mutual advantage of parent and child. The child acquires a valuable life skill, and the adult has to do fewer dramatic readings of Captain Underpants.

This has not always been the humanity’s attitude toward books with pictures.

Back in Europe’s Dark Ages, before the novel, the printing press, or public education were facts of life, literature was not fun and accessible.

It was exclusive and boring.

Persons with power (including but not limited to the head honchos in the Catholic Church) had mostly managed to stifle literacy in non-clergymen so they could keep the knowledge contained in the written word to themselves.

The problem was, since the populous at large could not read, they also could not tell the difference between a book of priceless, irreplaceable parchment and a stack of grocery lists.

As a result, the only documents that survived the semi-perpetual sackings of Dark Age Europe were the illustrated texts. Even the commonest man could interpret pictures on a page as something rather special in contrast to a book of words that meant nothing more to him than any other book of words. 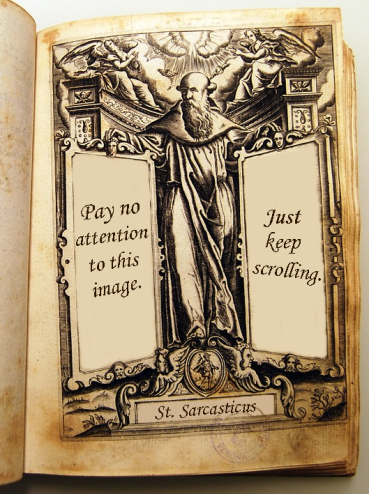 Later on, when the printing press and more widespread literacy came along, elaborate color pictures were phased out for the same reason (I believe) they get phased out for grownups, today:

Illustrations are expensive, time-consuming endeavors, and the common man only had / has so much disposable income for books.

Therefore, more cost-effective books became the standard, and those containing illumination-style artwork became the relics of the rich.

Now, there are those who could argue that if authors do their jobs right, their books should not need illustrations.

That’s true to a degree, and I reckon lots of authors like the challenge of conjuring visions of dragons for their readers with some carefully-chosen magic words.

Likewise, the revival of the comic book industry and the gradual elevation of the graphic novel as a genuine art form have greatly helped legitimized books with illustrations.

Yet, there’s still a stigma on illustrated works that sometimes gets them dismissed as “childish.”

This is unfortunate because historically, the illustration of text was irrelevant how good the book was. It was merely a means of adding value to the text.

If you do not share my opinions on this topic, feel free take this all with as many grains of salt as you require. As a lover of kids lit who never completely outgrew illustrations, I think we “grownups” do ourselves a disservice if ever we dismiss illustrated works as “kids’ stuff.”

Also, let’s be real, Fellow Writer whose ears have been relentlessly pelted with the dogmatic phrase “Show, don’t tell” over the years. Can you say with certainty that an adjective-filled paragraph describing the tremulous awe of looking a dragon in the eye is more exciting to our readers than actually showing them a dragon with the help of an illustration ?

Let me give you one of my favorite examples of how, as they say, “a picture is worth a thousand words.”

For reasons that would take time to explain, I got to work with a terrific artist named Karen Swarts in producing the illustrations for a Jeff Scott book called Mallory and the Dragon.

The story begins with a little girl and her grandfather in a kitchen having breakfast. The little girl is between 7 and 8 years old and Grandfather may or may not be wearing a poncho.

That’s it. Those were the only clues Karen got in the context of the story about what the drawing might look like, and this is what she came up with:

(I have since become a hopeless addict of this lady’s work. If you’d like to see more of her stuff, check out https://www.keaswartz.com)

In short, I guess a book with illustrations, once we reach a certain age, is like pants with no pockets. It’s not necessarily a hardship if they aren’t there, but it’s generally a nice surprise if they are.

And while anyone would complain about a garment with pockets / a book with pictures isn’t necessarily crazy, I think it’s safe to say that person has different priorities from me.