In Eva Figgis’s brief but quotable book entitled Light, she describes a morning as she envisions it as it unfolds for the Impressionist painter, Claude Monet:

“The sky was dark when he opened his eyes and saw it through the uncurtained window. He was upright within seconds, out of bed, and had opened his window to study the signs…

His appetite for the day thoroughly aroused, his elated mood turned to energy, and he was in his dressing room into the cold bath which sent his senses tingling humming an unknown tune under his breath…”

Yeah. I have never known an artist who liked mornings that much.

As we know, artists – yes, even the actors- are human beings.

Because there are all kinds of human beings who deal with mornings in all kinds of ways, I can’t presume to know what makes other artists reluctant to leave their beds behind them each morning.

What I do know is that the most consistent thing that makes me personally reluctant to propel myself upward and face the day is the emotional paralysis caused by anxiety and depression.

Again, I can’t claim to know what causes anxiety and depression for other artists / authors, and your experience might vastly differ from mine.

But for me, it starts with a feeling that there are amazing things to do, see, and write about in this ol’ world, the time I have to do those things is running out, and if I don’t do everything in my power to lead a worthwhile life every second of every day, before long I will have wasted my life.

You bet it does.

However, I am not the first or last writer wrestle with this particular locus of anxiety.

A little later in the early 19th century, Americans adapted this love of nature for a similar philosophical movement called…

If ever you attended public high school in the USA, some well-meaning teacher may have introduced you to the works of Transcendental writers the likes of Walt Whitman, Ralph Waldo Emerson, Henry David Thoreau, or Louisa May Alcott.

Those who considered themselves transcendent believed, among other things, that life is wonderful, everything matters, and self-reliance is the only way to gain spiritual insight.

On paper, the path of Transcendence is an enviable way of life, but the idea that everything matters all the time can put a lotta pressure on a dumb high school kid, and later on a lotta of pressure on a grown-ass man or woman who was gullible enough to take their teachers seriously that one time.

It is perhaps worth noting that the transcendentalists were not universally well received. One particularly harsh critic, a bitter Bostonian who went by the unlikely name of Edgar Allan Poe, satirized his transcendental peers in a story called “Never Bet the Devil Your Head” where in he referred to them as “Frogpondians” and their beliefs a “disease.”

But seriously Ed, how do you really feel? 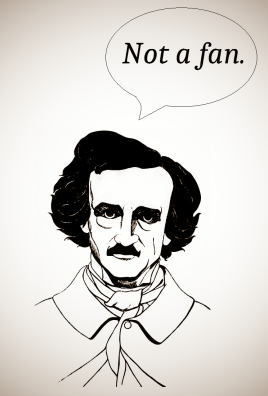 Also, if you look up a comprehensive list of Transcendentalists, you’ll find a whole lot of writers who go by all 3 names. That is because most of the transcendentalists were rich people to whom “self-reliance” likely meant something different than would it to a struggling writer like Edgar Allan Poe.

And for all Henry David Thoreau’s lofty boasts of self-reliance in his days on Walden Pond, he never grew so self-reliant as to do his own laundry. He took it home to Mother.

That part never came up in class. Teachers who wanted us to take American Lit seriously must have left that out for some reason.

Nevertheless, at their best, the transcendentalist writings on mortality awareness encourage folks live life as fully as possible.

At their worst, they precipitate in the reader a downward spiral of indecision, despair, and a much harder time getting out of bed in the morning.

Even decisions about simple things like “Do I want chicken or steak for supper,” become an anxious ordeal, if you believe everything matters. It feels as though your next judgment call could be the one that makes your life go to hell, particularly if you’re a ruminator who has made a few dumb decisions in your time and live in fear of  making another.

So how do you get past the fear that the Trancendentalists were right; that everything is important, and screwing some of those things up is an inevitable part of your day?

Incredibly, the answer comes from a bunch of fatalists who founded a completely different school of thought known as “Existentialism.”

Ever hear someone throw around phrases, “existential crisis” or “the existential blues”?

The concept behind these phrases may have been best summed up by a certain comic from Cleveland, Ohio with the deceptively simple words,

“Everything’s made up and the points don’t matter.”

Well loved in his day, that Cleveland comic. I wonder what ever happened to that guy.

Anyway, in contrast to the Transcendentalists who believed everything matters, the Existentialists the likes of (Fyodor Dostoevsky, Jean-Paul Sartre, Albert Camus Friedrich Nietzsche believed that freedom of thought and deed comes from the acceptance that nothing matters…

which you’d think would make an anxious depressive less inclined to get out of bed, not moreso. Stick around. I swear I’m going somewhere with this.

The existential dread or crisis experienced by persons in distress likely comes from a feeling of loneliness and futility in a seemingly hostile universe.

But according the Existentialists, the fact that the universe is big and hostile means a couple things:

1)  No matter how big our decisions feel to us, the universe is so much bigger, we could not mess it all up, even if we tried.

So, the perfect prom dress, the illusive fame / fortune, the unspoken “I love yous,” and the smoldering embers of a well-kept grudge?

They only matter if we say they matter.

Again, anxiety is irrational, so I don’t know if the idea we might be free to decide what matters will be helpful to… anyone who’s not me.

This is kinda something new I’m trying to better prompt myself out of semi-perpetual anxious / depressive spirals.

If any of this was helpful or provocative of thoughts and feelings (including the nasty ones), you are 12 kinds of welcome to talk to me about it in the comments.

If you’d like experience the audio / visual version of this article with some extra pictures and a screwy narrator, check out the link below.